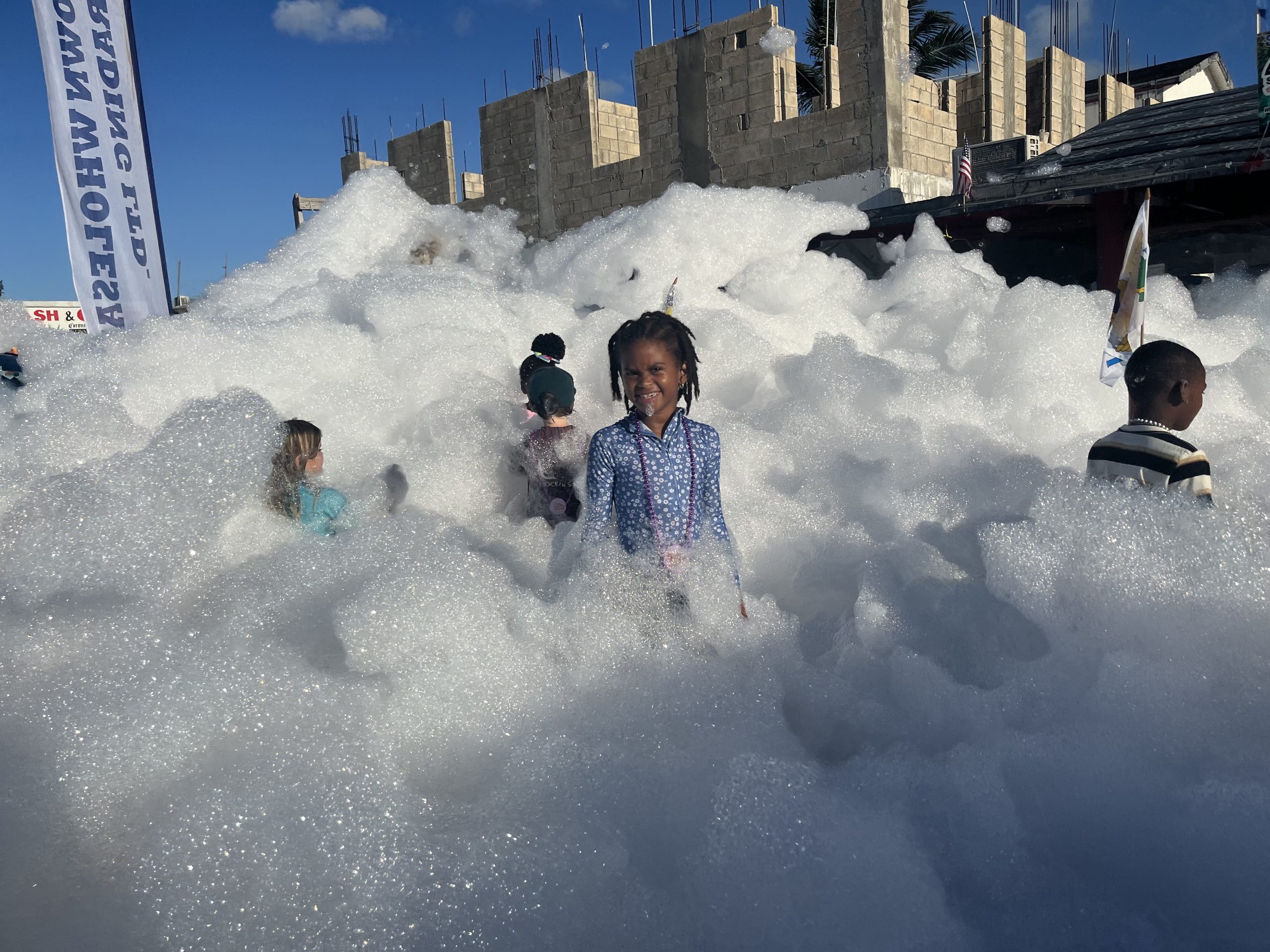 At sunrise on Friday, a dozen residents gathered on the Anegada ferry dock to set an intention for the weekend: that everyone arriving to the “drowned island” would be safe and enjoy their time at the 10th annual Anegada Lobster Festival.

The participants in the prayer circle, led by preacher Irma Vanterpool, took turns saying whatever came to their hearts that morning.

“Bless every vessel, every barge, and every boat that is coming,” Ms. Vanterpool said. “Let there be no accidents. Let there be safe travelings.”

It was the first time the prayer circle was held for any Lobster Festival, but for the residents who chanted and sang that morning, it was a way to set good intentions before a flurry of people arrived on the island.

And arrive they did. Start- ing on Friday afternoon, hundreds of people took party boats, yachts, ferries and airplanes to the northernmost island in the territory to partake in the festivities.

“We went over and beyond in terms of marketing,” he said. “We had a lot of people come regionally.”

Although he didn’t have numbers, he said attendance was strong enough for the event to be called a success.

“There were all smiles from restaurant owners, and when I had brief conversations with them they gave me the thumbs-up and said it was good,” he said. “They said this Lobster Festival reminded them of pre-Irma and pre-Covid.”

Many venues also offered live music and other activities. Although a “Lobster Crawl” was supposed to take place on Friday night, it was moved to Saturday night.

Jack Farley, a Virginia resident, was visiting the island for a few days before the Lobster Festival.

“It’s been five years since I’ve been back to the Virgin Islands, but I’m here to eat lobster and have fun and meet people,” he said. “I think it is amazing. The people here have figured it out: harmony, peace, happiness.”

He told organisers to “keep it going” and added that he’s ready for next year.

Mr. Clyne said that the event committee members will reconvene next month to consider what they need to improve upon and what traditions to continue.

Attendees, however, haven’t waited for the committee to post dates for next year: They’ve already started booking hotels for the last full weekend in November in anticipation, he said.

Fahie steps down, resigns his seat


Almost seven months after former Premier Andrew Fahie was arrested in Florida and accused of conspiring to smuggle cocaine into the United States, he resigned his First District seat and said he had retired from politics as of last Thursday.

The announcement came five days before he was facing likely removal for missing too many HOA meetings without leave from Speaker of the House Corine George-Massicote.

During an HOA meeting last Thursday, Ms. George-Massicote read aloud a letter from Mr. Fahie that marked his first public statement since his April 28 arrest.

In the letter, the former premier did not mention the charges against him or apologise for his actions, but he wrote that “the bright and prosperous future of the modern-day Virgin Islands” requires a “laser” focus on unity rather than discord.

“Allow God time to do what only He does best with time, which is to be the only true and fair judge while healing all wounds,” wrote the ex-premier, who is under house arrest in Miami pending a trial scheduled for next year. “As the journey continues, our Virgin Islands must approach a future head-on, because the future is coming with or without our permission.”

Mr. Fahie also referenced the vision of the territory’s foreparents, the difficulties the territory faced during the Covid-19 pandemic, and the importance of being prepared for the challenges ahead.

If Mr. Fahie had not resigned, he likely would have lost his seat on Tuesday under rules that require elected HOA members to vacate their seat if absent for more than three consecutive sittings without the speaker’s leave.

In July, Ms. George-Massicote said she would not excuse any further absences from the HOA because of Mr. Fahie’s inability to attend due to his house arrest. A new sitting started on Tuesday.

Mr. Fahie’s resignation marks the end of a 23-year career in politics.

He was first elected to the First District seat in 1999 at age 28, and he held it without interruption until his resignation last Thursday.

He was appointed premier in 2019 after leading the Virgin Islands Party to a sweeping victory in that year’s general election.

However, HOA members ousted him from the premiership a week after his arrest, and he was replaced by his deputy, Dr. Natalio “Sowande” Wheatley, under the current National Unity Government.


Foot care, medication management, and mental health were among the topics covered by a panel of healthcare experts during the Living Well with Type II Diabetes Expo on Nov. 17 at the St. Mary’s Church Hall on Virgin Gorda.

The BVI Health Services Authority organised the evening session — which was also available virtually to residents on other islands — both for people with type two diabetes and for others who wished to learn ways to reduce their risk of develop- ing the disease.

Several speakers took the podium during a series of interactive presentations that incorporated techniques designed to engage attendees, including multiple-choice questions and discussions of case studies.

BVIHSA Medical Officer Dr. Shana Kay Fraser explained how to define diabetes and identify its early signs and symptoms. She also stressed the importance of early action in preventing the disease.

Dr. Calisa Cruickshank offered tips for blood sugar testing, such as where to inject insulin, how to use a blood sugar monitor, and how to treat hypoglycemia and hyperglycemia.

Later, attendees got on their feet for some physical activity with Raynecia Simmons of Razor Fitness.

Attendees received raffle tickets at the door for a prize-giving at the end of the expo. Free informational handouts were distributed as well.

Attendees thanked the BVIHSA for organising the event.